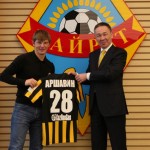 Reports are out claiming that former Arsenal star Andrei Arshavin feels Arsene Wenger is now holding the club back.

The Russian international, who left The Emirates three years ago, is adamant the Gunners missed out on a big chance to win the Premier League title this season.

“Apart from that there have not been any major changes.

“Arsenal have had the same head coach for a long time and he has his ideas.

“The whole team depends on the viewpoint of Arsene Wenger and his views towards football. I don’t know if this conservatism is a hindrance.”