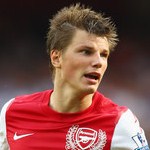 The Arsenal boss admits that the Russian international is more comfortable in a central position.

“I believe that he is more at ease now in a more central role because if he is on the flanks it is very physical and you have to defend a lot,” the manager told Arsenal Player.

“That’s not always his strongest part in the game.

“You can see that in the future he can be a very influential player behind the striker.”