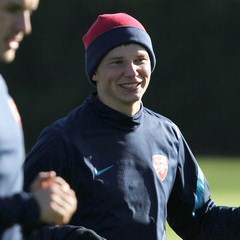 Andrey Arshavin sees tonight as a great opportunity for Arsenal to qualify for the knockout phase of the Champions League.

The Gunners host French club Marseille with a win likely to put them four points clear of the rest of the group providing Borussia Dortmund beat Olympiakos in Germany.

The Russian international believes that it is a great chance for Arsenal to qualify early and ease some pressure that has built in the formative stages of this season.

“We have to build on our result from two weeks ago. We were disciplined in France and very solid defensively, which meant we could take our chance to win when it came,” he said in the official matchday programme.

“Now we top the group, and have a good opportunity to qualify for the knockout rounds today.

“I’m sure that Borussia Dortmund will beat Olympiacos at home, so if we win tonight we’ll be through – let’s take the opportunity we have.” Arsene Wenger Urging UEFA To Get Serious Over FFP