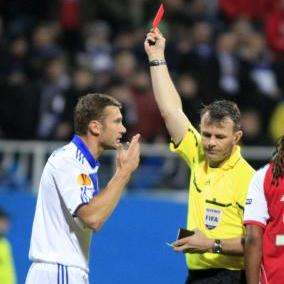 Dynamo Kiev striker Andriy Shevchenko was sent off in their 1-1 draw with Sporting Braga in the first leg of their Europa League quarter-final in Ukraine.

Former Chelsea striker was introduced at half-time by the hosts, but departed just 15 minutes later when he was shown a second yellow card.

Already booked for a late lunge on Miguel Garcia, Shevchenko was shown a second yellow after playing on and knocking the ball into the net despite being flagged offside.

In scenes reminiscent of Robin Van Persie’s sending-off for Arsenal in Barcelona, Shevchenko claimed he had not heard the referee’s whistle.