It has been reported that Andy Carroll is staking his claim for a possible return to action with West Ham United. 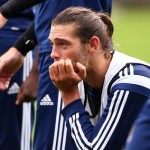 The England international centre-forward has missed all matches so far this season because of a heel injury he sustained at the end of last term but managed to get through a 60-minute behind-closed-doors friendly on Wednesday.

Former Newcastle United and Liverpool attacker Carroll will now look to step up his fitness in order to be available for Sam Allardyce’s senior squad in the coming weeks.