Reports are out claiming that Manchester United’s defence will need to be at the top of their game if they are to beat Arsenal on Monday night. 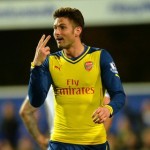 That is the sentiment of United great Andy Cole who suggests the Gunners have a quality forward line at their disposal for the FA Cup quarter-final at Old Trafford.

?However, Cole feels Arsene Wenger’s back half is not at it’s strongest and has identified that as an area to try and hit the north Londoners.

?”Attacking-wise Arsenal are as good as anyone now with Alexis Sanchez, Danny Welbeck, Olivier Giroud and Mesut Ozil – if he pulls out a performance,” Cole told United Uncovered.

“We need to try to nullify those forward positions. If we can do that, we’ll have a good chance. On the flipside we need to get at their back four – which isn’t the strongest – and create a few chance.

“In a lot of these games the first goal always seems to be pivotal. It’s about going out there, playing with no fear and playing like Manchester United, with real galvanising, attacking football and scoring goals.”?