It has been reported that Manchester United legend Andy Cole refuses to write off their title chances. 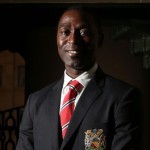 Cole even thinks the title is not beyond United’s reach this term.

“Nothing is above Manchester United,” he said.

“Many years ago Alan Hansen said you’ll never win anything with kids and we won the Premier League that year. Anything is possible.”