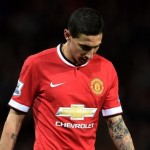 Reports are out claiming that Angel di Maria wants OUT of Manchester United this summer, it has been revealed.

The Daily Express reported that Di Maria has told his agent to instigate him a move away from Manchester United.

The Argentine only moved to Old Trafford in the summer but has suffered a woeful dip in form since the turn of the year.

PSG, Juventus and Barcelona are all reportedly monitoring his situation.

Di Maria is available for the trip to Anfield this weekend after serving a one match ban for his red card against Arsenal.