It has been reported that Angel di Maria has apologised for his ugly gesture towards fans during Real Madrid’s win over Celta Vigo.

However the Argentine international insists he was not intending to insult anyone. 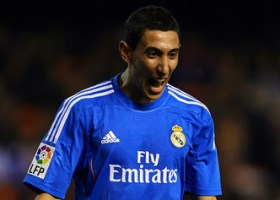 The 25 year old told the club’s website: “I made a normal gesture when I was going off. I did not want to do anything aimed at the fans or the manger either like people were saying. It was a natural movement which all men make especially when you are running. You do it a lot on the pitch.

“The truth is that if anyone was offended by it I apologise, but it is like I have said. I made a natural movement which was not aimed at anyone in particular. On the TV you can see that it is a fraction of a second. It is nothing. I did not spend a long time deliberately doing it. It was something natural. I apologise to the people who may be offended by what I did, but it was not aimed at anyone.”

Real Madrid has started an investigation to clear up what happened, something the Argentine thinks is a good idea.

“I think it is the right thing to do. Not just for them, who have started the investigation, but also for me as it means I can explain the situation and what happened, as I have also already explained to several Argentine radio stations. I think it is good as I can talk to them directly and explain what happened on the pitch.”