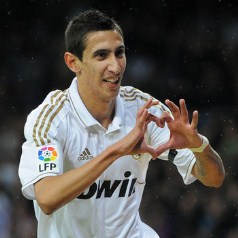 It is said that the Scottish tactician has been a big fan of the Argentine international since his time at Benfica and feels his game is now developing – particularly defensively – under Real coach Jose Mourinho.

Di Maria has complained about the lack of progress over new contract talks at Real – and was criticised by teammates earlier this season for making his frustrations public.

Ferguson is exploring the prospect of adding a new winger to his squad, with no wide players – Robbie Brady apart – coming through his youth system.

Interestingly, Di Maria’s status at Real has always been shaky, according to the Catalan press, as he wasn’t a signing president Florentino Perez was particularly enthusiastic about.