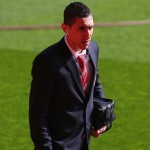 It has been reported that Manchester United boss Louis van Gaal steamed into Angel di Maria after victory at Liverpool.

The Sun says Van Gaal gave Di Maria the hairdryer treatment after the game and made it clear he was not impressed.

That left the Argentine ace, 27, upset and it creates more doubt over whether he will stay at Old Trafford beyond this season.

Di Maria started his United career well but has been hit with a string of setbacks on and off the field.