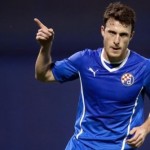 Dinamo have agreed a £780,000 permanent deal with United for Henriquez, which is expected to be rubber-stamped in the summer.

“I hope to return someday to Manchester United. I was crushed because I was so close to playing in the first team and then had to look on from the outside. That was very frustrating,” Henriquez said.

“I came with the expectations of playing in the Premier League and the FA Cup and nothing happened. I only played in the Under 21s.

“When you arrive so young in a league like the English, you realise that the differences are huge. Now I am more adult and less weak.” I Want To Be Manchester United Legend! – Memphis Depay