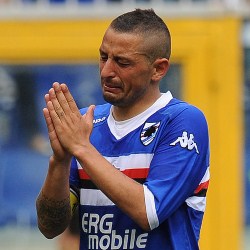 Sampdoria midfielder Angelo Palombo has declared that he wants to end his career with the club.

The Samp captain has already declared he intends to stay following their relegation.

“I’ll end my career with Sampdoria,” the midfielder, who will be 30-years-old in September, declared.

“I’m proud to have received some important offers after the season I’ve just had with Sampdoria and I thank the clubs who have come forward.

“However, I haven’t thought about leaving here, not even for a moment.

“I think I have already demonstrated how tied I am to this shirt.

“The armband which I wear every Sunday is something that is an honour but also a responsibility.

“You see the value of a true captain in times like this.”