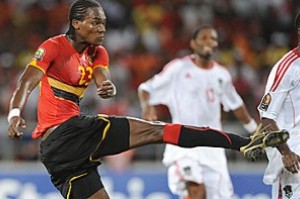 Hosts Angola atoned for throwing away a four-goal lead against Mali in their opening game by beating Malawi 2-0 on Thursday to move top of Group A in the African Nations Cup.

Two quick goals early in the second half from strikers Flavio and Manucho settled the contest.

Flavio scored his third of the tournament in the 48th minute while Manucho followed six minutes later with an opportunistic effort.

Flavio scored with a trademark header at the end of a storming run and cross from left back Mabina.

Manucho’s strong physical presence proved vital as he stripped Malawi captain Peter Mponda of the ball on the edge of the Malawi penalty area and cracked home a powerful shot to make it 2-0.