It has been reported that Manchester United starlet Anthony Martial believes the Red Devils are capable of winning both the Premier League and Champions League this season. 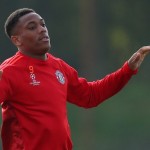 United currently sit third in England’s top flight, just two points behind leaders Manchester City, while they are in second in Champions League Group B after two match days.

The French international striker, who joined United from French outfit AS Monaco during the summer, is confident the Red Devils can compete for silverware in both competitions.

“I think we can win the Premier League and the Champions League this season,” Martial told Telefoot.

“We are among the top five clubs [in Europe].” Wayne Rooney Honoured To Be Named Captain Of Manchester United