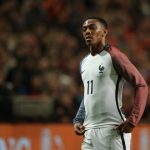 It has been reported that Anthony Martial is demanding an instant pay-rise at Manchester United.

The Sun says he earns £68,000 a week at United but he is already agitating for a new contract.

The French international agreed to a deal that runs until 2019 when he arrived last summer.

England captain Wayne Rooney earns close to £300,000 a week and midfielder Bastian Schweinsteiger is not far behind.

Although Martial cannot command those salaries, he wants a raise.