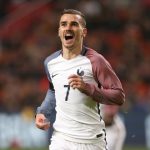 Reports have emerged claiming that Antoine Griezmann has warned France supporters that booing and jeering Olivier Giroud will only distract the national team.

The Arsenal striker has been made the scapegoat for Karim Benzema’s controversial omission from Didier Deschamps’ final 23-man squad for Euro2016.

Giroud has scored seven goals in his past five starts for Les Bleus but still he is the subject of negativity and scorn from the national team fans who are only hurting the players according to Atletico Madrid star Griezmann.

“Those who whistled Olivier Giroud weren’t hurting only him but also us as well,” he said ahead of Friday night’s tournament opener against Romania in Paris.

“We did everything so that he might score, so that he feels confident with us and he has responded on the pitch.”

Giroud is expected to lead the attacking line for France with Griezmann playing just off him as the hosts attempt to win their third Euro title.