It has been reported that Atletico Madrid winger Antoine Griezmann has no regrets turning down Arsenal. 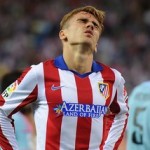 The former Real Sociedad star chose Atletico over Arsenal and PSG in the summer.

“Was it weird when PSG and Arsenal were also interested? [Atletico are] still the champions of Spain!

“I needed a club like that and a coach like Diego Simeone to progress. I always demands intensity in training. That’s my style and I like it.”