It has been revealed that Atletico Madrid striker Antoine Griezmann has stated that a move to Manchester United this summer is possible. 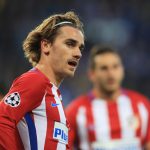 The French international also revealed his future will become clear within the next two weeks.

Although Griezmann’s advisor has commented publicly about United’s interest in his client, this is the first time the France star has given any indication that he may leave Atletico.

When asked on French T.V programme Quotidien what the chances of him joining United were on a scale of 1 to 10, Griezmann responded: “Six.”

The 26-year old – who has scored 26 goals in all competitions – was then asked if he understood what he was saying, to which he replied: “Yes.”

He then added: “I should know more in two weeks.”

Atletico manager Diego Simeone has recently admitted that it is possible Griezmann could leave the club this summer.