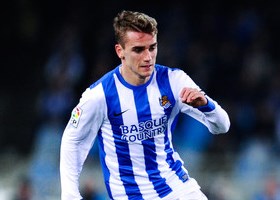 It has been reported that Real Sociedad winger Antoine Griezmann has welcomed interest from PSG.

Reports claims that the French champions are eyeing the France U21 international for the summer market.

“I do not know. As I said, I’ll end this season here in San Sebastian. But it is true that Paris is amazing,” said Griezmann when asked about PSG’s interest.