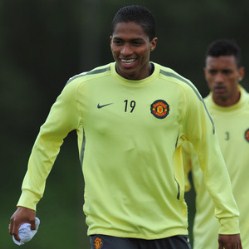 Reports are out claiming that Manchester United winger Antonio Valencia has signed a new four-year contract with the club.

Valencia, now age 25, will stay with United until the end of the 2014-15 season. The winger joined the Red Devils two years ago from Wigan and has gone on to make 69 appearances, scoring 10 goals.

The Ecuador international suffered a serious ankle injury in September last year and was sidelined for five months, but he made his return in March, demonstrating impressive form to help United clinch a 19th league title.

“I am delighted to stay at United,” he told the club’s official website.

“Since my first day at Carrington, I have been happy here. I hope that I can continue to develop as a player. I am looking forward to making my contribution to helping this squad compete for more trophies.”

Sir Alex Ferguson said: “Antonio has made a fantastic contribution since his arrival. His speed, crossing ability and versatility have been a big asset for us.

“He has a quiet, unassuming way of going about his business, which is underlined by great strength of character – as his recovery from such a bad injury last season proves.” Inter Milan To Confirm The Signing Of Nemanja Vidic