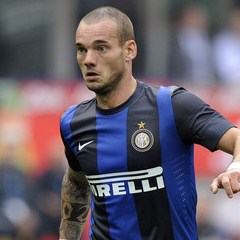 It has been reported that Anzhi Makhachkala are not in the frame for Inter Milan midfielder Wesley Sneijder.

The 28 year old Dutch international appears on his way out of Inter after refusing to accept a pay-cut.

“There is a lot of talk about Sneijder, but I can guarantee he is not on the list of players who interest us,” said Anzhi director general Ayvaz Kaziakhmedov told FCInterNews.it.

“The club strategy does not allow for random buys. It all depends on the budget and the objectives we decide along with the Coach.

“We want to build an important squad, but that doesn’t mean we can only do it with headline-grabbing names. Signings have to be thought out. However, I won’t rule out surprises in the transfer window.”

The former Ajax and Real Madrid playmaker has also been linked with a move to Manchester United.