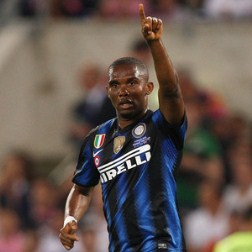 Reports have surfaced that Russian side Anzhi Makhachkala have struck terms with Inter Milan for striker Samuel Eto’o.

Peppino Terri, who has been working on the deal, declared yesterday he expected Anzhi to up their bid on Monday.

However, more talks were held in the afternoon and Anzhi have announced an agreement is almost over the line.

According to Calciomercato.it that proposal has already come in from the Russian club after another lunch meeting.

There is said to be a verbal agreement between the clubs for a €25m fee plus €4m in performance-related bonuses.

This brings the total fee up to Inter’s €29m price-tag and French newspapers claim Eto’o has already signed a three-year contract.

Arsenal Target Eden Hazard : Inter Milan Is One Of The Best!