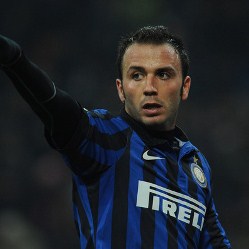 Reports are out claiming that Inter Milan striker Giampaolo Pazzini is wanted by Anzhi.

The Russian side have been linked with Napoli attacker Ezequiel Lavezzi.

However Sky Italia says the Russians are focusing more on a centre-forward signing.

The 27 year old Italian international striker is reportedly high on their shopping list.