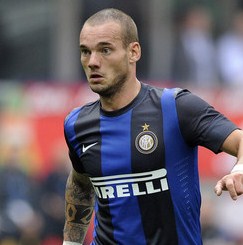 Reports have emerged that Anzhi coach Guus Hiddink has refused to rule out a move for Inter Milan midfielder Wesley Sneijder.

The Dutch international playmaker is being linked with a January move to the Russian club.

“I know Sneijder well and I appreciate him. Ask him what he intends to do,” smiled Hiddink.

Sneijder has so far made a total of 114 appearance for the Italian giants scoring 25 goals in all competition.

The 28 year old has also been linked with a move to Premier League giants Manchester United.

Hernandez : This Season Has Been A Dream Come True For Me! Schneiderlin Urging Man Utd To Be Patient With Anthony Martial