Reports are out claiming that Russian side Anzhi are ready to sell Lacina Traore in January. 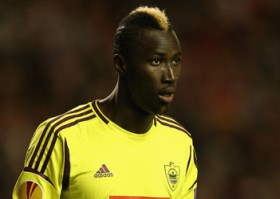 It is said that Anzhi coach Gadzhi Gadzhiev has given the green light to the Ivorian’s sale ahead of the January market.

Manchester United, Juventus and Liverpool have been linked with Traore this season.

Gadzhiev has decided to cut loose the striker as he doesn’t suit his playing system.