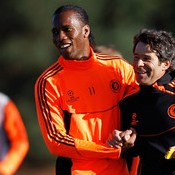 Reports have emerged that Didier Drogba is set to receive a stunning contract offer from Russia’s Anzhi.

The Daily Mail has reported that the Ivory Coast veteran will be offered £10million a year to join Russian side Anzhi Makhachkala in the next transfer window.

The former Marseille star is yet to sign a new contract despite the club saying they want him to stay when his deal ends in the summer.

Anzhi, funded by billionaire businessman Suleyman Kerimov, have approached Drogba’s advisers over a move which would be worth £10m a year net to Drogba. Torres Describes Career At Chelsea As ‘Swimming In Wet Clothes’