Aquilani : I Know Why I Have Not Played Regularly 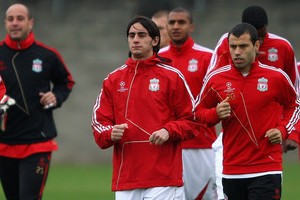 Liverpool midfielder Alberto Aquilani has indicated that he knows why he has not played regularly since proving his fitness.

But the Italian did suggest some frustration with his limited role after his goal scoring performance in the win over Portsmouth.

Aquilani was asked if he has spoken with Benitez about a season that has seen him play just 11 Premier League matches.

He replied: “Yes, we have spoken, but not too much.”

He was then asked if he understood why he had been left out to soften and shrugged his shoulders and said: “Yeah.”

Jose Mourinho : I Always Win At Stamford Bridge, My Home!