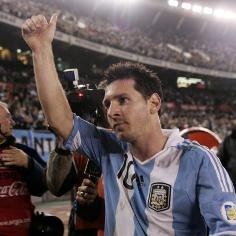 Gonzalo Higuain scored a hat-trick and Lionel Messi his first goal in a competitive match for Argentina in two and a half years as the hosts crushed Chile 4-1 in their opening 2014 World Cup qualifier.

Higuain put Argentina ahead from Angel Di Maria’s pass in a counter-attack after seven minutes at the Monumental stadium in Buenos Aires and Messi, whose last goal in a competitive international was against Venezuela in March 2009, netted the second in the 25th.

Higuain chipped in a Di Maria cross from the left seven minutes into the second half and completed his hat-trick when Messi capitalised on a faulty clearance by keeper Claudio Bravo and found the striker with a low pass.

Chile, who beat Argentina for the first time when the teams last met, a 2010 World Cup qualifier in Santiago in Oct. 2008, pulled a goal back through Matias Fernandez on the hour.