It has been reported that Argentina boss Tata Martino is relaxed over the form of Angel di Maria whose initial impact with Manchester United after a £59.7m move has dipped in recent weeks. 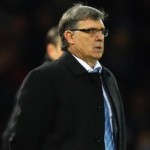 Even though the former Real Madrid player has not scored in four games for United, his national team boss feels he will prove a success in time.

Martino said: “Angel is one of the top, top players in world football, but when you don’t understand the league, when you are not a total expert, it is hard to make an opinion.

“His start was exceptional. Generally when players get used to a new league, to a different style, to different teams. His form now is more typical of a player going to a club, as opposed to burst into the team.”