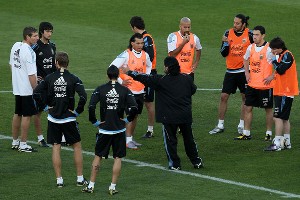 Check out this video of the Argentinean national team training in perparation for the World Cup. Conducting the training is their legendary manager Diego Maradona.

Diego Maradona is well known for his football and more recently for all the unwanted hype and publicity.

During this training session Maradona orders half of the team to stand in the goal-post area while the other half were ordered to shoot the football at them.

Even though it actually resembles an execution by a shooting squad, the players look like they’re having a blast and enjoying themselves.