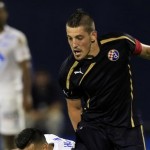 The 24-year-old played the entire contest as Zagreb shocked the Premier League outfit with a 2-1 victory.

Ademi must now wait for the results of his B sample as he faces the prospect of a two-year ban from football.

The Croatian club released a statement confirming they were aware of Ademi’s failed drug test.

“We are aware of the results of the doping control test after the Champions League first round match against Arsenal,” the statement read.

“Our player, Arijan Ademi, tested positive, and Uefa has opened proceedings against him.

“According to Uefa rules, Dinamo cannot comment on the case until the B sample is given.

“For years, our players have been regularly subjected to doping controls and nothing like this has ever happened, so we have to say that we are surprised by the result.

“Arijan Ademi was tested six times last year and each time the result was negative.

“Players have also been tested several times this season by Uefa and the Croatian Anti-Doping Agency and everyone was always negative.”