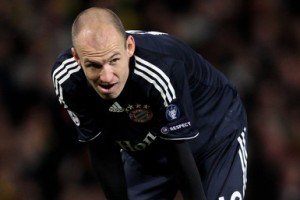 Furious Fergie claimed his side’s quarter-final defeat was down to ‘typical Germans’ getting Rafael sent off for two yellow cards.

Robben said: “I can understand the reaction from Ferguson but he is wrong.

“We did not put pressure on the ref to send off the player, it was just the right decision by him. I think more United players should have been booked.

“In football you don’t always get what you deserve but in this game we showed enormous resilience.

“It’s not easy to come back from 3-0 down against United but over 180 minutes we deserved the result.”