It has been reported that Arjen Robben is supremely confident that Louis van Gaal is the perfect man to lead Manchester United out of their current mire. 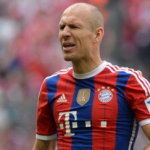 The Red Devils struggled under David Moyes last season and have started the new campaign without a win in four matches including a humiliating 4-0 Capital One Cup loss to League One club MK Dons.

Bayern Munich star Robben worked alongside van Gaal in the Holland national team setup so is well-versed to suggest that the Dutchman will be successful in rebuilding things at Old Trafford following the successful era of Sir Alex Ferguson.

The 30 year old told the LA Times : “My experiences with him [is] he’s a great coach to build a new team,”.

“Hopefully he gets the time because you also have to be realistic about it.”

Robben added: “They bought some great players. [But] you also have to look at the quality of the team.

“They still have some very young players. I think he’s the perfect guy to develop the team. But he needs time. It wasn’t the best start and hopefully they will give him the time and then I’m sure that he will be successful.

“You always need the right mixture. Of course you need the quality in the team, but what makes the team very successful is that it’s really about the team and everybody’s working together and that the character is good.”