Reports are out claiming that Bayern Munich winger Arjen Robben says Arsenal are capable of beating any team in Europe. 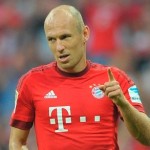 Robben told the Telegraph: “I thought last season they did very well. They won prizes; the FA Cup and the Community Shield.

“They looked very stable and this year they look very strong. I was really surprised to see them lose two Champions League games but, on their good day, I think they can beat any team and we have to be aware.”