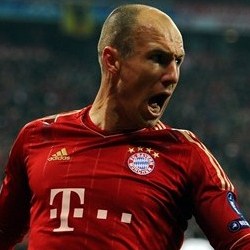 It has been revealed that Bayern Munich winger Arjen Robben is set to reject the Premier League for a move to Juventus.

With less than 18 months on his current deal, the Dutch international star is weighing up whether to quit Bayern this summer – and has received interest from former club Chelsea, Manchester City and Manchester United.

However Tuttosport claim that the former Chelsea and Real Madrid ace would prefer a move to Turin.

Indeed, he has decided, if he is to leave Bayern, he will only consider Juventus as a destination .

Bayern on their part are attempting to convince Robben to stay, offering him a massive £170,000-a-week to re-sign.