It has been reported that Everton boss Roberto Martinez says Arouna Kone is edging closer to a first team return. 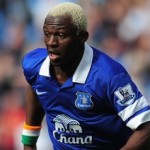 The 30 year old Ivory Coast international has not featured since October but played in a friendly against Stoke this week and is edging closer to a first-team return.

“Arouna played 55 minutes and it was a real positive, exactly the same as Bryan Oviedo (making his comeback from a broken leg),” said Martinez.

“They are on their way back and while it is impossible to give a date I don’t think they are very far away.”