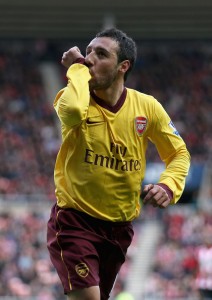 Arsenal have told Atletico Madrid that Santi Cazorla is not for sale after the Spanish club made an ambitious bid to sign the midfielder.

Atletico have money to spend following the £50million departure of Radamel Falcao to Monaco this summer and have made another attempt to sign Cazorla after losing out to Arsenal when he left Malaga last year.

Miguel Angel Gil, the president of Atletico, is believed to be in London to negotiate a deal and reports in Spain suggest the player has agreed terms.

However, Arsenal are adamant that Cazorla, 28, is a key part of their plans and is not available at any price.

Arsenal are hoping Cazorla can help them end their trophy drought and are looking to strengthen the squad, with £70m in transfer funds available. Arsenal, Liverpool Set To Do Battle For Micah Richards

Arsene Wenger Confident Wilshere Will Be Fit For The World Cup