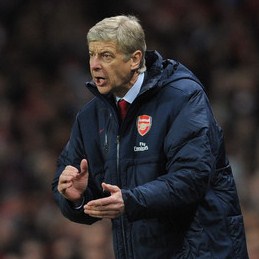 Arsenal ensured their 125th birthday celebrations were marked with a victory when defeating Everton 1-0 at Emirates Stadium in the Premier League thanks to a goal of outstanding beauty from Robin van Persie.

Just a day after the club unveiled statues of Herbert Chapman, Tony Adams and Thierry Henry outside their ground, Van Persie demonstrated why he may one day attain legendary status of his own in Islington with his 15th and best league goal of a wonderful season.

With Arsenal’s record goalscorer Henry looking on and applauding from the stands, Van Persie settled the encounter against an Everton side that had retreated into a 4-6-0 formation when converting a stunning volley after 70 minutes that is unlikely to be bettered in Arsenal’s 126th year.

Arsenal’s seventh victory in eight league games takes the resurgent Gunners into fourth place above Chelsea, while Everton, who have now lost eight of 11 matches in all competitions, sit in 12th, five points above the bottom three.