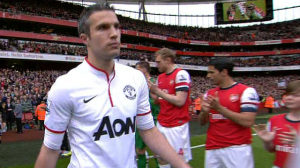 Robin van Persie scored from the spot on his first return to the Emirates Stadium since joining rivals Manchester United as Arsenal suffered a setback in their bid to secure a top-four spot.

Chelsea’s win over Swansea on Sunday saw the Blues leapfrog a point ahead of the Gunners and into third, with Tottenham two points behind in fifth.
Arsenal took the lead after just two minutes when Theo Walcott fired in low.
Van Persie equalised from the spot after he was fouled by Bacary Sagna.