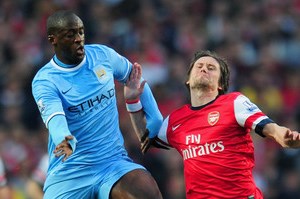 11’ PENALTY CLAIM – Arsenal claim a penalty but it appears to be a crafty attempt by Rosicky to fool referee Mike Dean by tripping over Zabaleta’s foot. The Argentine had pulled out of the challenge and Dean has got that one spot on.

17’ GOAL! Arsenal 0-1 Manchester City – This is all about Silva. The Spaniard’s perfectly weighted pass finds Dzeko, whose shot hits the post and Silva reacts first to tap in the rebound.

53’ GOAL! Arsenal 1-1 Manchester City – Flamini scores for Arsenal with a first-time finish from 12 yards after Fernandinho’s slip provided the Frenchman with the opening.

61’ ARSENAL CHANCE – Podolski is sent clean through but can only find the side netting as he opts for precision over power.

75’ CITY CHANCE – Somehow Arsenal survive as Dzeko rounds Szczesny but cannot get a shot away. Yaya Toure has a go but Arsenal get players back to clear.