Manchester City failed to take full advantage of Chelsea’s earlier defeat with a 1-1 draw with Arsenal at the Emirates. 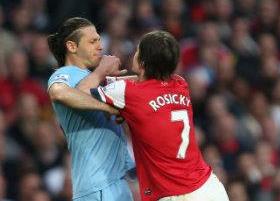 Arsenal looked jaded throughout the first half and their best chance to harm City came in the shape of a penalty appeal when Pablo Zabaleta appeared to trip Tomas Rosicky. But replays suggest Rosicky was looking for it, validating referee Mike Dean’s decision not to blow.

City were inspired by the magic feet of Silva throughout and it was no surprise when he popped up to score the opener. The Spaniard started the move with a perfectly-weighted pass to Edin Dzeko, whose shot rebounded back off the post and straight to Silva to tap in.

City’s performance level dropped in the second half as Arsenal raised theirs, and it wasn’t long before the Gunners were level courtesy of an unlikely source. Lukas Podolski’s cross found Flamini, who took full advantage after Ferndnanho’s slip to stroke in the leveller.

Chances came and went for both sides, but City held on for a point that keeps them third, two points behind leaders Chelsea with two games in hand.