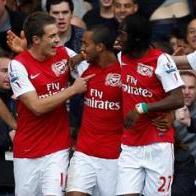 Goals at either end from Thomas Vermaelen saw Arsenal held to a 1-1 Premier League draw by Fulham at the Emirates.

Both goals came in a second half that Arsenal dominated, the Belgium defender mis-kicking past his own keeper on 65 minutes but atoning with a powerful header 17 minutes later.

The home side pushed for a winner but great goalkeeping from Mark Schwarzer and uncharacteristically poor finishing from Robin van Persie saw Fulham hold on for a well-earned point.

The result ends Arsenal’s five-match winning streak in the league and putting them sixth, a point ahead of Liverpool, who face Manchester City on Sunday.