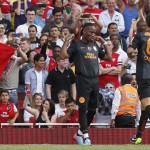 Didier Drogba denied Arsenal with two late strikes as Galatasaray fought back from a goal down to win the Emirates Cup.

Theo Walcott opened the scoring as his devious cross found its way beyond everyone and into the far corner, before Drogba scored a penalty and wrapped up victory with a superbly taken winner.

The Gunners lacked the intensity they showed against Napoli in the opening stages but were up against a blunt Gala attack, shorn of its two most potent weapons in Drogba and Wesley Sneijder, who were benched.