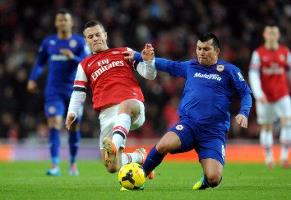 13’ – WALCOTT MISS – Walcott slides to reach a Wilshere cross but hits the side netting.

28’ – MUTCH CHANCE – Cardiff break through the middle and Mutch fires his shot from a tight angle at Szczesny’s legs.

31’ – ANOTHER WALCOTT CHANCE – Santi Cazorla pulls the ball back for Walcott on the edge of the box, but his shot is wide of the post.

64’ – WILSHERE SHOT – An excellent turn into the box, Wilshere shoots fiercely at goal but hits the post.

67’ & 68’ – MERTESACKER HEADERS – Unmarked on both occasions, Mertesacker sends an easy header wide of the goal.

88’ – BENDTNER WINNER – Marshall beats away Sagna’s back-post header, but the Danish striker sends the rebound into the roof of the goal.