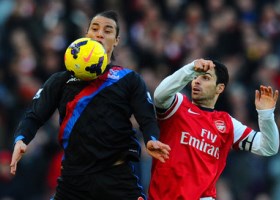 Arsenal have won seven Premier League matches 2-0 this season, they are one of only two teams this season to have had the exact same result seven times; the other team is Palace, who have now lost 2-0 seven times.

Oxlade-Chamberlain’s second was the 150th Premier League goal Crystal Palace have conceded away from home, excluding own goals.