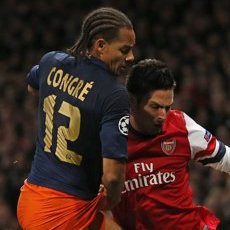 Arsenal secured qualification for the knockout stages of the Champions League with a 2-0 home win over Montpellier.

Second-half goals for Jack Wilshere – his first in almost two years – and Lukas Podolski made sure of at least second place in Group B after leaders Schalke beat Olympiakos.

The Gunners must now win in Athens in a fortnight to stand any chance of finishing top and so head into the last 16 as one of the seeds.

Sensational Goal In The Snow By Wesley Sonck – Video Teammates Have Toughened Me Up – Arsenal Goalkeeper Martinez