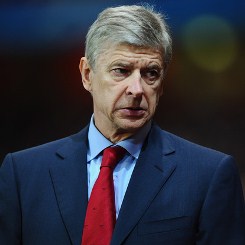 The Dutchman, who passed the 30-goal mark for 2011 with a double at Norwich on Saturday, repeated the feat tonight.

He headed home following an excellent run and cross from Alex Song five minutes into the second half, and then swept home after a flick-on from a corner as the Gunners clinched top spot in Group F.

Arsenal were, though, made to work hard by an industrious German side, who lost playmaker Mario Gotze to injury after less than half an hour, and grabbed a stoppage-time consolation through Japan forward Shinji Kagawa.

Jurgen Klopp’s team were well organised, having come into the European tie on the back of a 1-0 league win at Bayern Munich, which cut the deficit at the top of the Bundesliga to just two points.