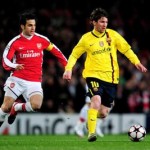 Just 20 seconds into the second half and Zlatan Ibrahimovic put the visitors ahead with a curling chip that went straight over the top of Almunia’s head, before the former Inter Milan ace fired in another after Xavi caught a sleeping Arsenal defence to see the Swede through.

But Theo Walcott, who replaced Bacary Sagna for the Gunners came on to promptly blast one in for Arsenal, before Barcelona youth product Fabregas brought Wengers side back with a late penalty after Carlos Puyol was shown red to keep them in the hunt for their first Champions League final since 2006.