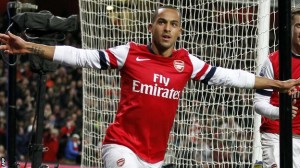 Arsenal rescued a point with a stirring comeback after Liverpool looked like they would recover from their shock FA Cup defeat by Oldham with victory at Emirates Stadium.

Luis Suarez and Jordan Henderson took full advantage of an Arsenal defensive display that plumbed the depths to put Brendan Rodgers’s side on course for victory after an hour.

But Arsenal showed great resolve to respond swiftly and score twice inside three minutes through Olivier Giroud and Theo Walcott and ensure a thrilling game ended in a draw.

Liverpool will be disappointed at conceding that two-goal advantage while Arsenal manager Arsene Wenger may regard a point as a relief, such was the generosity of the defending that presented the visitors with so many opportunities.


Kieran Gibbs Out for 3 Weeks with a thigh injury